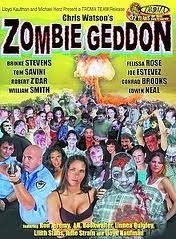 Oh Troma, how do I love thee?  Let me count the ways…Nobody but you could make a movie as horrific as Zombiegeddon

and still leave me dying of laughter.  You truly have the art of bad movie making down to a T.  God bless you, Troma and God bless you, Lloyd Kaufman.

Okay, now that I’ve gotten that out of the way – any movie that starts out with a fake newscast about how the movie is truly a piece of shit, has got to be worth watching (at least IMHO).  I mean, if they’re willing to tell you up front not to take the time to watch the movie and that people have threatened to kill themselves after watching the movie just to erase the memories – I ask, how can you NOT watch it??  Maybe that’s just me though.  I tend to do the things people warn me against. 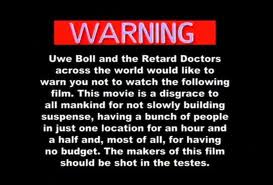 Alright, now, imagine that you have a video camera and you get all your friends together and say, “Hey!  Let’s improv a whole movie about zombies!”.  Now imagine that your friends are all Paris Hilton.  Welcome to “Zombiegeddon” – the acting skills of Paris Hilton with the homegrown directing, writing and editing skills of Joe Schmo.  (I know, it’s a pretty horrible image, Paris Hilton’s running around and acting all over the place.  I sincerely apologize for putting that in your head).  I think there might have actually been a script for this but there was no need.  None at all.  The entire movie looks entirely improvised, the fight choreography left me on the floor howling with laughter and Lloyd Kaufman?  *sighs*  Once again I say bless you for making an appearance as a janitor with a gimp leg.

But what of plot you say?  Well, there’s not much of one actually, but the basic premise is this:  Satan is making super-zombies and oh, no, what will the world do, won’t somebody do something?? Never fear though because “In every generation, there is a chosen one.  He alone shall stand against the zombies.”  That’s right, guys and gals.  There is a chosen one, a guy with a sacred birthright, who just happens to be a crooked cop.

Yeah, it really just doesn’t get better than this…

Fan of South Park?  Fan of Troma?  Then boy, have I got just the thing for you! Cannibal the Musical

was created in 1993 by a guy you might’ve heard of, Trey Parker, and produced by his friend Matt Stone and released by Troma, god bless them, in 1996.  The combination of Parker, Stone and Kaufman in one movie was almost too much for this girl to handle…

Originally created as a three minute trailer for a student film class, there was such notice taken that Parker and Stone raised 125k to film this masterpiece.  So sit back and enjoy the story of Alfred Packer who is leading a group of men into Colorado territory to find gold. 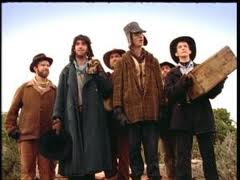 This is the story of how Packer and his group battle their way across the snow drenched mountains into Colorado…how they run across an evil trio of trappers who cause them a whole mess a trouble, from stealing Packer’s horse to singing off key about the life of a trapper…this is a story of what happens when this group runs out of food and must resort to cannibalism.

This movie has a little bit of everything – violence, musical numbers,  Japanese speaking Native Americans and in the background of one scene, if you listen closely, you’ll hear Cartman singing a little ditty.  Pure awesomeness.  True, the majority of the acting here isn’t going to win any awards (except maybe a Razzie) and the Wild West and cannibalism might not be your thing (although the cannibalism really is quite light) but this movie is just too fun to not watch.  Plus it’s all done with a song and a dance making this my second favorite Troma film after “Tromeo & Juliet”.

Check out today’s He Said/She Said!  It’s all about the crack! 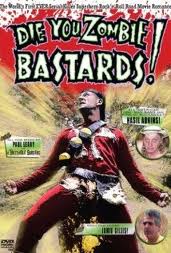 is quite possibly the best movie ever made.  No, really!…Well, okay, not really but it’s the best “worst movie that took 5 years to make” ever made.  As far as cult flicks go, this one is aces.  It pretty much has it all and then more.  In fact, the last scene consists of random people and things just popping up out of nowhere: disobedient dogmen, giant robots, a superhero’s sidekick, giant bugs and possibly even a gorilla!  WOW. 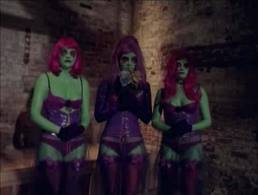 This is in it… 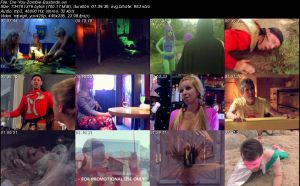 ALL of THIS is in it!

So what’s the plot?  (Seriously, after those screenshots do you really care??)  A lovable serial killer’s wife gets kidnapped by a guy named Nefarious who is intent on turning the world into zombies.  He’s already kidnapped a set of triplets and turned them into zombie sex slaves (see Image 1) and he’s decided that Violet (the wife) will be his.  Muhahahahhaaaaa!!!!  So the serial killers sets off on a quest to save Violet…a quest that involves a game of Operation, a puff of blue smoke, a cheese monster and a suit of skin. Not following?  Don’t worry, it’s not really important.

OH WAIT!!!!  Did I mention that rockabilly legend Hasil Adkins is in this???  Never heard of him?  Neither had I!  But he rocks, I can tell you that much.    I highly recommend you check his Wiki page to learn more (he has a whole album dedicated to chickens!!!) 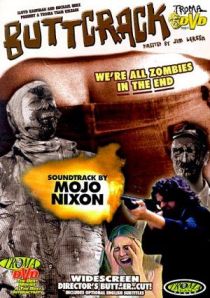 Shakespeare it’s not, but Buttcrack

is also not the most horrible movie I’ve ever seen.  I’d almost call it “bordering on this side of decent.”  But then I also watch a lot of weird ass movies.

So what’s it about you ask?  Well, it’s about friendship and roommates, preacher men and witches, zombies and buttcracks.  This film packs in a whole heck of a lot in its 68 minutes.  Sadly, however, it’s still not quite enough to satisfy this girl.

The story (what little there is of one) follows a pair of roommates.  One’s a decent sort of fella (we know this because he has a girlfriend and clothes that fit) and the other?  Well, the other is slovenly and constantly has his crack on display. Mr. Decent and his girlfriend finally reach the point where they can no longer stand Mr. Buttcrack and after what may be the lamest marriage proposal in the history of the world and a nice little vomiting scene, Mr. Decent accidentally (“accidentally”?) kills Mr. Buttcrack by dropping a radio in a tub.  Oh but wait!  Mr. Buttcrack has a sister who’s a witch and she brings him back to life so all can experience ZOMBIE BUTTCRACK!!!!!  Muahahahahaaaa!  What more could one want from a movie?  Just for extra measure, there’s also a very strange, slightly creepy preacher man (who actually refers to himself as “Preacher Man”), the scariest clown portraits you’ve ever seen and the lamest “1 Year Later” sequence ever.  And there you have it.  Clowns, preachers, witches, buttcracks and zombies all rolled into one little film.

I can’t recommend this movie but neither can I give it a “Run Away Screaming Rating”.  Watch at your own risk and consideration.  And remember, “We’re all zombies in the end!”