The First Five – How to Kill a Judge

Today is a guest First Five from E over at theipc!  Thank you so much for contributing!!! 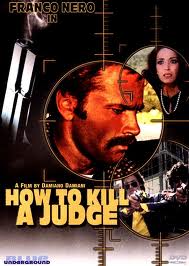 There’s not much that bothers me more than not completing something, be it a book or a magazine or a job or a bar of soap. But it really bothers me when I can’t finish a two hour movie for the love of Pete. I have really been enjoying watching these old 70s Italian horrors and this is what NetFlix advised I order based on my previous choices. Being stupid like I can be sometimes, I didn’t read anything about it and fired it up and my god this was the most boring and irritating thing I have seen in years.

Far from being a horror movie (this is some sort of political thing) this also came to me with subtitles. It never bothers me to “read” a movie but it can get difficult when there’s too much talking and that’s what this was. This was nothing but a bunch of people talking and talking asfastasfucking possible – in Italian – and waving their hands above their heads. And screaming. Well, it seemed like they were screaming. If you take any sort of old stereotype about an Italian man he always seems to be screaming and waving his hands in the air. And that’s what these guys were doing – the entire time.

Not only could I not keep up with the reading, so I had no idea what the fuck was going on, they were loud and it was just irritating and finally at about 30 minutes I had to call it quits. I hated that I had to quit because I really like the lead in this, Franco Nero, but this was too much. My friend Mary took it off of my hands and politely pointed out that there is a dubbed version on the disc but I was too far gone to try it again (she said it was kind of good). Anyway, I quit this stupid movie and, for posterity, I sent it over to my other  good friend Misty for all of our sakes.

Tags: how to kill a judge, movies that make you scream, movies too bad to finish, the first five 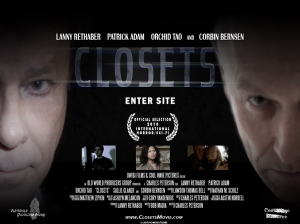 I’ve decided that every once in awhile I’m going to do a bit called “The First Five”.  Why?  Because sometimes, the first five minutes of a movie are enough to convince you that you’ve made an unwise but hilarious choice in viewing material.

For my first entry into the “First Five”, I’d like to introduce to a movie called “Closets”.  Now “Closets” came my way via a 6 movie pack I picked up called “Deadly Games” (you know those 6 packs you get at Walmart for $5?  Oh yeah…. ;)).

The first thing you should know about “Closets” is that it’s a true indie film.  So indie that the entire first scene is green screened.  As in, one guy is in a parking garage and another guy is standing in a street but it’s actually done via green screen.  Now, I was once a part of a very indie, lo-budget sci-fi webseries that was almost completely green screened so I’m not knocking the green screen….exactly.  But do you need some kind of permit to film one man in a parking garage?  Do filmmakers not sneak into places they’re not supposed to be anymore??  Anyway….this scene ends with an explosion and the death of a young girl, who was in a supernatural cage (I dunno, she was surrounded by these wavy lines??).

Our main guy is blamed for her death.  He has a trial.  They didn’t have money for a courtroom scene either.  The entire trial is intoned over shots of a woman driving down a highway, fixing her hair.  I don’t get it either.  Oh and in Arizona, you go to jail for 3 – 5 years for murder.   Does anyone else find this less than accurate?  I mean, young kid dying and all.  Fictional Arizona is apparently way more lenient than real Arizona!

Finally (after the woman is done driving), our guy gets out of prison.  The woman appears to be his wife who has remained loyal all these years.  Now it’s up to our guy to go get a job to support the family!  But wait, he has that pesky murder sentence hanging over him….so after one lousy interview where a suited man snarks to his co-worker “I remember giving those shoes to Goodwill, hahahhaaaa….” our guy is completely and totally bummed.  He goes to a bar and pulls out a handful of change and asks for whatever that will get him.  It’s about a jigger of whisky (yeah.  I used the word jigger.  Cause I’m cool like that.)  The bartender notices how depressed our guy is and offers him a magic pill.  DUDE, why do bartenders never give ME drugs????  I’m not some older guy who just got out of prison, I’m a cute chick!  We live in a messed up world, people, messed up I tell ya……Oh and the bartender gives him a shot on the house.

And this, my friends, this is where I stopped…..because the first thing this psychic does is have an apparent orgasm when she gets a “vision”.  This guy lives in one seriously f’ed up world.  (I kinda want to go to there).

Posted in Lo-Budget, The First Five