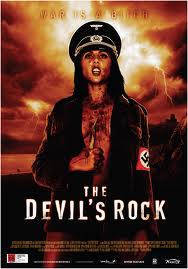 Has anyone else seen this??  You’ve all probably already reviewed The Devil’s Rock

and I just totally missed it in my busyness.  E, have YOU seen this??  Cause I think you would really dig it, like TOTES!

According to Netflix, this was a horror flick (and I mean, c’mon look at that cover!) but I wouldn’t categorize it as horror at all.  I’m of the opinion that just because there’s a demon in a movie, that doesn’t make it horror but maybe that’s just me.  I think I’d call this one more a “war drama with supernatural elements”.  Oh, and don’t let that cover fool you into thinking this is some wicked cool Nazi exploitation type film either because I kinda thought there would be an Isla, She Wolf of the SS vibe happening but that’s nowhere to be found.  All that aside, I dug this.  Not the kind of dig that would make me watch it again but the kind that makes me go “Oh yay, I’m glad I didn’t turn that off after the first 20 minutes like I seriously considered!”.

Our story starts on the eve of D-Day when two New Zealand soldiers arrive on Forau Island.  After navigating a beach planted with mines and tank traps, they are distracted by the sound of screams and gunfire.  They approach a German fortification to increasing sounds of distress.  Also this whole navigation takes TWENTY MINUTES.  Just wanna throw that out there.  I don’t mind a slow burn at all but this is the point where I almost stopped watching.  There wasn’t a lot of character building going on in this time really, very minute as there was almost no dialogue, and not being a fan of war movies this had me concerned I’d opened up the wrong movie on Netflix.  But let’s continue shall we?

Soldiers kill a Nazi and head into the fortress only to find a whole bunch of other Nazis dead in varying degrees of gore not to mention a little book of black magic.  One soldier dies while the other is captured by the only Nazi left alive in the building and, after he is tortured for a bit, our soldier discovers that the Nazis called forth a demon, a shapeshifter, to use against the Allies. DAMN. 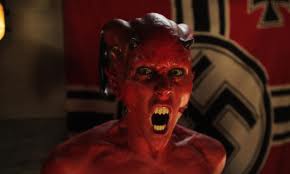 Now our Nazi is pleading with our soldier to help him banish the demon before it’s too late and our soldier is being tempted by the demon who has taken the form of his dead wife, Helena.  What’s a soldier to do??  I say watch The Devil’s Rock

Although not what I was expecting going in, this is a nice drama with sufficient gore and not a bad build up of tension.  I was surprised at the lack of cheese factor (there was only one instance where I giggled inappropriately) and surprised (in the good way) by just how much I enjoyed this.  Rainy day or looking for something other than a supernatural haunted house movie?  Give this one a go.

Editor’s Note:  Please excuse any spelling/grammar/mistakes of any kind as I’m functioning on 4 hours of sleep.