.  No really, that’s the title.  Of course, I couldn’t pass this baby up, not with a name like that.  And of course, it’s an Asylum offering.  *sighs*  Sometimes I wish I lived in the Asylum world…I mean sure I’d be dodging crazy natural disasters left and right all while being hunted by fairy tale creatures and other stuff but wow, can you imagine what fun it would be??

Anyway, this movie starts out quickly with the WTF? science.  The 500 MPH storm is created by oil drilling.  No, I don’t understand it either.  It’s exactly like that time a volcano in the Antarctic exploded, melting glaciers and creating a metal tornado.  Unlike Metal Tornado though, this movie was WAYYYY less fun.

Here are our protagonists and here we shall start with the not so awesomeness.

*Editor Note:  Lindsay Lohan was not in this movie – this is just my reaction at this point.*

I almost gave up here, people, I really did.  But I stuck it out.  All I know is that there’s a magical laser beam that works, then doesn’t work, then works; Casper Van Dien is a grinning maniac every time he’s in danger and then this is what’s left:

This 86 minute storm destroyed the world.

This was such a let down after Hansel & Gretel.  I mean, I was really freaking proud of the Asylum after that one.  But this…oy, just stay away, far, far away.

Tags: 500 mph storm, casper van dien, smoke monster from Lost says what?, someone call Bill Nye, the asylum, why god why, wtf is wrong with your science people?

is, I’m fairly certain, the best freaking movie you guys have ever put out and honestly, I’m so proud, it brought a tear to my eye, no lie.  I mean, sure you guys totally ripped off the Hansel & Gretel phase that was going on just last year (but hey, it’s a fairy tale so any movie version is ripping it off, right?) but this was…this was almost entirely coherent and had a couple of gross out moments that weren’t so fake that I was compelled to laugh.  Plus Dee Wallace was AMAZEBALLS in this.  I would NOT want to meet that woman in the middle of the woods, no way, no how. 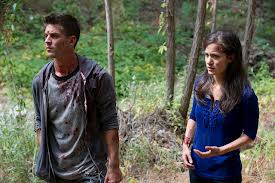 No, for realz, we’re teenagers. Totes.

So above we have Hansel & Gretel, who are like, totally teenagers, y’all.  Gretel works at the local bakery called “The Gingerbread House” (ha! get it??) where Lilith serves up the best meat pies around.  And we all know what happens when meat pies are involved, right, kiddies?  I mean, we all did see Sweeney Todd, yeah?  No?…. Anywho.  H&G’s mom died at some point and Hansel feels really guilty about that (although I couldn’t ever figure out WHY – like maybe there was a car wreck when she was coming to pick him up or something?) but she’s been gone long enough that Gretel mentions not being able to remember her as well as she should.  Well, good old Pops has been seeing this religious chick named Ruby for like a month or something and now they’re getting married.  Hansel, being the whiny little asshat he is, starts yelling and crying and runs off into the woods in anger.  Okay, I totally made that crying part up but still.  Gretel gives chase to try to talk some sense into her idiot twin brother when whoopsie, he steps into a conveniently placed bear trap.  Ouch.

The only place around ends up being Lilith’s from “The Gingerbread House” and Lilith is totes a sweetie so of course she bandages that wound up and feeds Hansel all the pastries in the world and then some “special” candy that she takes for her glaucoma.  *giggles*  Next thing you know, Hansel’s fast asleep and Lilith’s all, “Oh just stay here tonight, kiddies.”  Then she gives Gretel some “magic” tea that knocks Gretel right the hell out.  This is the point where I started to be wary of Lilith’s intentions here, just sayin’.

Lalala, chores instead of leaving the house for the hospital for my brother, tralalala….

The next morning Gretel wakes up to find her brother gone with an explanation of a neighbor having taken him to the hospital.  Why doesn’t she leave straightaway?  Well, the woods are dangerous, y’all, she might as well wait for that neighbor to come back for her.  In the meantime, might as well help Lilith out with a few chores, right?  Hansel wakes up to an entirely different scenario – one where he’s locked in a dungeon with three other teens who tell him that they’re being fattened up to be cooked later on.  Hansel isn’t the brightest crayola in the box so he kinda just goes, ‘Huh, what?  Oh pastries! Oh wait, don’t eat those!”  And this is about the time we meet these fellows… 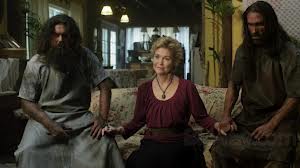 Awww, just look at those adorable twinsies.  And after this comes some back story about Lilith losing a daughter and being 800 million years old and then everyone’s running around trying not to get cooked and those big dudes go all Leatherface on people and there’s a cop (and the killer exchange of: Gretel – “You shot the sheriff!!” Lilith – “Oh, I shot the deputy too.” Totes brills) and Pops and Ruby show up and there’s a lot of weird stuff that makes you think Ruby is actually Lilith’s daughter but no, that’s totes trickster and then well, ya know…it’s Hansel & Gretel – we kind of know where this is going. 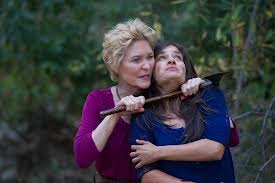 I WANTED you to be my daughter, you bitch! We’re just alike, you know!

Seriously, this is by far, the best Asylum flick I’ve seen.  Dee Wallace is KILLER with her witchy psychotic granny portrayal (and you know, that’s really what makes this movie cause the other actors I could take or leave).  There’s one scene where Hansel starts to eat himself because he is so delicious (insert raunchy jokes here) that was super fun and not as fake as the usual Asylum stuff is and another girl getting sliced and diced with this crazy wires also works out really well.  Of course we have our moments where Ruby is dead but moving, the cops are at the top of the idiot food chain and it’s ridiculous to think Lilith who has been doing this for years now just woke up and thought to herself, “Welll, gosh darnit, I’m gonna have me those twins even if I have to take the whole town down to do it.”  Seriously, WTF, Lilith?  *sighs*

If you love The Asylum, you definitely have to check this one out!

is The Asylum’s answer to Day After Tomorrow (which I pretty much love because I am a sucker for apocalyptic destruction of earth type movies) and wowza is it horrible on levels of epic proportions.  I mean, I love The Asylum, don’t get me wrong – it would kind of rock my world to be consistently in their movies – but c’mon, guys.  Really?  Really??

We start with a man in a car with his son and daughter.  He’s dropping the girl off at the airport so she can catch her flight back to college.  While he’s there he gets in touch with a dude in Canada (or something) who does something sciency.  Science guy tells Dad that a volcano is erupting and um…glaciers are going crazy?  Yeah, sure, let’s go with that.  Next is a race against time as a glacier (or glaciers?) start eating up the East Coast of the US and nature wreaks havoc.  I think.

As with most movies of this nature, the science is a bit…questionable.  Like when Mom, Dad and Brother are trying to call Daughter and Mom screams, “Why isn’t she answering her phone?  She’s on a plane!  Don’t they have wi-fi now??”  Um…WHAT??  I’m pretty sure there’s this whole law or rule or something about cell phones being off on planes that has nothing to do with wi-fi…unless I am the one who is getting the science and logistics wrong here…The weather is fun, ranging from snow and ice storms to hurtling winds to volcanic eruptions to earthquakes.  Lots of random people die and a whole bunch of nothing happens.  Finally, the US government and military declare war on the glacier.  Yes, that is a line in the movie – “You declared war on a glacier?”  Ha!

This will never be winning any kind of award like EVER but if you have a hankering for cheesy disaster sci-fi…well, really, skip this and go for something more fun. 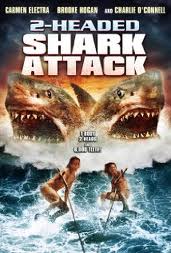 Let me preface this by saying I really really like The Asylum.  They’re the guys that put out tons of movies (most of which are knock offs of movies in the theatre – “Transmorphers” anyone?).  But 2-Headed Shark Attack

was 2 ridiculous for even me.  And that’s saying something.

The film stars Brooke Hogan, Charlie O’Connell and Carmen Electra as part of a crew of college students who are spending a semester at sea (well, O’Connell and Electra are part of the crew, Hogan is a college student aboard).  Early in the movie, a shark (not a 2-headed one, a regular one) gets caught up in their propeller and they decide to go to a nearby atoll to see if there’s any materials they can use for repair.  Of course then the 2-headed shark pops up eating people left and right and to top it off, the atoll is sinking into the sea (as in it’s crumbling to pieces).  Things look bleak for our hapless heroes!

Look at me! I’m Carmen Electra in a bikini!

I wonder if Charlie and his brother Jerry talk about acting a lot.  Charlie – “Dude, I just booked this role in “2-Headed Shark Attack” with Carmen Electra!  It’s gonna be kickawesome!”  Jerry – “Awesome, bro!  When I’ve finished up my stint on Broadway working with Alan Rickman, I’ll totally come visit you on set!”  Yeah……

Brooke Hogan wasn’t great but she wasn’t horrible.  I only cringed like 50% of the time and I really expected it to be worse.

2-headed shark attacks should be wicked awesome and gory.  Here, they are not.  😦

I absolutely understand the point of saving money but when you use the *exact* same clip of Carmen Electra screaming, “Get out of the water!  Get out of the g–damned water!” twice in a row in such an obvious way, I find it entirely sad-making.  And then I laugh you.

I highly recommend skipping this one.  There is absolutely nothing here worth viewing.