Even though there’s one more movie after this, Wes Craven’s New Nightmare

is the film that really brings the series full circle.  Originally dreamt up around the time he was writing Dream Warriors (but turned down by studio execs), this film brings back a less kind and gentle (and cartoonish) Krueger for fans. 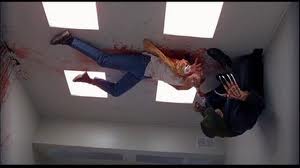 This throwback to Tina from the first film also brings it full circle.

You might remember this one as the film where Freddy really and truly comes to life.  Heather Langenkamp stars as herself as does Robert Englund and Wes Craven.  The story starts with the filming of a new Freddy movie where Freddy’s glove mysteriously comes to life and starts killing people…but wait!  That’s just a dream that Heather is having!  Heather’s just a little anxious about all the upcoming press for the 10th anniversary of Nightmare on Elm Street.  She also has a kid now and a husband.  But she’s been having bad dreams, see?  And prank phone calls that sound like…FREDDY KRUEGER!!!!  *insert ominous music* 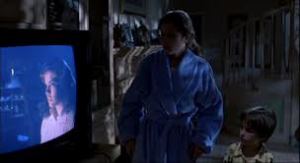 Honey, how many times do I have to tell you – you can’t watch Mommy kill people!

So long story short – Wes Craven is working on a new script, one that he dreams up every night and it’s all about how pure evil can be real and then defeated and this evil is taking Freddy’s form because of Heather and Freddy really thinks she’s Nancy or something and then there’s this awesome stuffed animal dinosaur that the kid has that guards the end of his bed and people die and everyone thinks Heather is crazy (cause really, you’d think that too) and then she and the kid get kidnapped to dreamscape world and apparently Robert Englund is a really freaky painter. 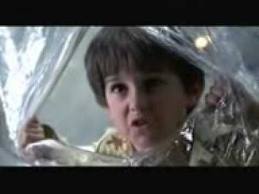 This kid was apparently in every movie made starting in 1989 up until he hit puberty.

I enjoy this one mostly because I think about how freaking fun it must have been for the actors to all be playing some version of themselves and then some version of a character they had played (or had been playing) for years in the past.  It’s like if I made a movie exploring my childhood and played young Misty (I wouldn’t, that would be tragic but you get the point).  This is like the epitome of t.v. reunion shows, you know?  And I like the idea of something entirely made up becoming real and everyone’s just standing there going, “WTF?  Seriously?  Dudes, this is the stupidest thing ever.”  And then of course Freddy is more like the Freddy of yesteryear – nasty and less punny.  Always a plus.

Short review I know but I enjoy this one – it’s gotta be my third fave out of the series (although technically this isn’t part of the series and is meant as a standalone).  If you’re going through the franchise, be sure to include this one! Also I find the trailer really cool…

Tags: freddy krueger, heather langenkampf, rex the dinosaur, that kid that was in everything, wes craven's new nightmare