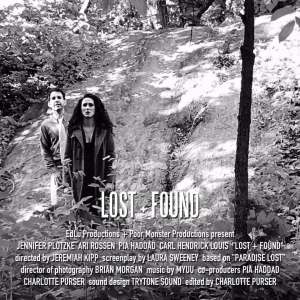 I grew up in a Southern evangelical household which means I’m not religious at all as an adult (trust me, if you’d had an attempted exorcism performed on you as a teen, you’d be wary of religion too). I DO love reading & learning about religions though; probably because I’ve always had a fascination with mythology and to me these are just more mythical tales. I’m quite familiar with the story of the angels’ Fall from heaven (am actually studying the Book of Enoch at the moment for something that I’m writing) and all that came after. There are different versions of the tale but John Milton’s Paradise Lost

LOST + FOUND, directed by Jeremiah Kipp, is a short shot entirely in black & white that retells Paradise Lost in a modern, elegant way. Jenn Plotzke is a delight as Satan – all holy fire (or unholy as the case may be) and sensuality, ready to destroy God’s favored creatures in revenge. Ari Rossen as Beelzebub makes a good sideman, silent but ready to do whatever his master asks of him (and looking oddly like the angel from SUPERNATURAL…). I felt like Carl Hendrick Louis as Adam wasn’t in this enough at all. There was only a glimpse or two of him; he was an afterthought. (Sorry, Adam. Not your story.) And our Eve, Pia Haddad, seemed less innocent and surer of herself than one might perhaps consider her as and very, very willing to go chill in the garden with a lovely lady. (Sorry again, Adam!)

Sorry, Adam. Today is just not your day.

The costumes were simple (angels as accountants – why is that the universal standard? Who started this thing? I demand to know.) and the dialogue is sparing (the first couple of minutes consist of Satan explaining her whole “let’s corrupt the world’ idea, then the rest is a voice over from Ari – also, excellent job, Ari). The acting and direction are really what made this film; and the use of black & white instead of color. You’d think that with the Garden of Eden, you’d need lots of bright colors to portray the “magicalness” of it all. Instead, Adam & Eve each have a shimmer of glitter over one of their cheekbones – between that and the b&w you get a dream-like quality that draws you in more than any vivid colors or magical realism could. It was an excellent choice to make.

Something wicked this way comes.

Essentially, this is a cool retelling of Paradise Lost. Dreamy, sensual, and elegant, it’s a sight to behold. 10/10, would recommend. (I don’t really have a rating system. Just go watch it.)