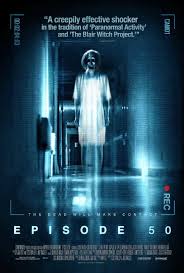 Hmmm…what to say about Episode 50

?  Fair to middling, I guess best sums it up.  There’s nothing new here, nothing shocking but as far as acting and story goes, this is a quick, easy pill to swallow.

We start out rather cutely with a TV crew of paranormal investigators investigating a couple’s house.  My favorite part here is, when hunting around for the ghost, the husband is carrying a hammer (as if that’s going to do any good) and then accidentally beams his wife in the head.  The next shot is her with a bandage and black eye.  I know, I know, I shouldn’t laugh just the way they do it was hysterical (I’m also a little lacking in sleep though…).

Next up is some dying guy who owns an abandoned asylum that’s supposed to be one of the most haunted places ever.  He hires our paranormal team to spend the weekend at the asylum because (at least as far as I can tell) if they find something paranormal, then he’ll be a ghost.  If they debunk everything there, then he’s going to spend eternity in Hell.  Um, k…

Unfortunately, our paranormal team has to also work with a Christian paranormal team (which is new to me – I didn’t think the Christian religion was big on the paranormal but maybe that was just my church) who are there to PROVE that the place IS haunted.

Of course since we’ve got two paranormal teams in an insanely haunted asylum, things go pretty much straight to hell but it’s with very little blood or violence.  There’s no chills or scares here, just your standard “made ya jumps” and ghostly ghastly quick moving women.  And then it gets a little cheesy at the end.

It doesn’t suck but it’s nothing special either – silly fun if you’re in a crowd that scares easily.