Yay Nostalgiathon!  In case you’re looking for even more nostalgia, head on over to the Nostalgiathon 2012 page to all the latest entries – there’s some super fun stuff there!

On an unrelated note, I’m in a show that opens this weekend which of course means a full week of tech and dress rehearsals so I will be around all spotty like.  And let’s not even talk about January just yet.  It’s gearing up to be a wild ride… 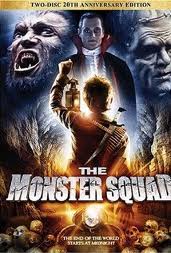 Once upon a time, there was a wee lass named Misty who was all of seven years old. Misty’s parents thought it would be absolutely delightful to show her a little film called The Monster Squad.  Why would they do this?  Who knows?  Unfortunately for Misty’s parents, this experiment did NOT end well.  As a matter of fact, the wee lass sat up ALL NIGHT LONG refusing to sleep because she KNEW that at any moment Dracula would walk through her bedroom door and do something horrendous.  And as we all know, if a wee one doesn’t sleep, the adults don’t sleep.  This was the occasion that led to the horror movie ban in Misty’s life, the ban that would not be lifted until her sixteenth birthday. 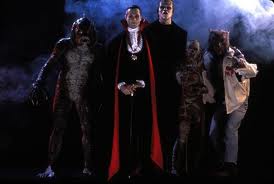 Don’t mess with these muthas!

specifically for Nostalgiathon.  I literally had not seen it since that oh so wonderful viewing at the age of 7 and my memory mostly consisted of the traumatic aftermath.  When asked about this film before curling into the fetal position, I would simply say, “Classic movie monsters come back and kids have to fight them.”

First, I’d like to say…Mom & Dad, what the hell were you thinking showing me this???  Dracula picks up a 5 year old girl by the chin and calls her a bitch – how was I not supposed to think he had a deeply intense hatred of tiny children of the female variety and would hunt me down?  Sheesh!  (Btw, I do so totally love my parents, I just don’t know what they were thinking here.  *giggles*)

Second, this movie is absolutely a classic.  Awesome kids, great one-liners and an all around good time – way perfect for adolescent boys especially, methinks.  And ah, the 80s when kids could curse like sailors and check out scantily clad women in the movies all while smoking ciggies or being smoked around.  Such a simpler time…*sighs*

My name is HORACE!!

This is one I just sort of assume everyone has seen but if not – well…classic movie monsters come back and kids fight them.  See, my hazy memories were correct.  😉  It’s kinda like The Goonies (which I love) but with some real drama.  The old German guy for one?  Had no memory of that and when I saw him talking about monsters, it kind of broke my heart a little.  I was NOT expecting something like that to be in a “kids'” movie.

A FEW OF MY FAVORITE THINGS:

EVERYTHING about the above exchange cracked me up.  Just EVERYTHING.

That freaking adorable dog.  So cute.

Frankenstein for the WIN!

Not gonna lie, through jaded adult eyes some of the middle got a bit boring but overall one fun ride and definitely worth the revisit!

The Man in the Moon – Nostalgiathon 2012 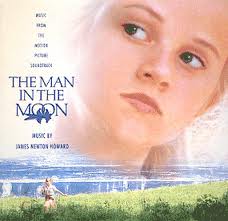 Now that Nightmare is over and done with, I’m finally free to start with Nostalgiathon 2012!  And my very first entry is the 1991 film, Man in the Moon

.  Starring Reese Witherspoon in her very first time onscreen and  featuring Sam Waterson in his last theatrical film before he started with Law & Order, this is a film I had completely and utterly forgotten about until I browsed HBO Go a couple of nights ago and found it and was flooded with hazy memories of having loved it when I was eleven.  What better way to start of Nostalgiathon right?

Directed by Robert Mulligan and also starring Jason London (do y’all remember those London twins??), Man in the Moon

is set in the summer of 1957 and focuses on the Tant sisters, Dani (Witherspoon) and Maureen (Emily Warfield).  Dani is fourteen and a firecracker who still likes to run off down the pond to go skinny dipping while Maureen is seventeen and dreaming about what the future holds for her.

Talking to the Man in the Moon

One day whilst skinny dipping, Dani meets Court (London) a new neighbor whose family has actually been friends with her parents since high school (prior to moving away and then moving back).  It isn’t instantaneous, but pretty darn close, before Dani is head over heels for Court.  They become great friends and Court even gives Dani her first kiss.  This is all before Court finally meets Maureen and, for them, love is instantaneous which leads to hurt feelings all over the place and confusion on Dani’s part.  When tragedy strikes will Dani find it in her heart to forgive her older sister or will their relationship be lost forever?

I don’t know why I loved this as a child – I don’t remember a lot from childhood – but I’m going to say it was probably the melodrama because I was quite the melodramatic child (and may or may not tends toward melodrama now… ;)).  I’m sure it struck some chords with me for a variety of reasons – the Tants reminding me a bit of my own family, not knowing who I was at eleven or who I would be but dreaming of leaving the small town I was stuck in for bigger and better things, plus first love – I imagine all little girls dream of that at some point.  So how did it fare watching it as an adult?

Frankly, I really enjoyed it.  Sure there were scenes that were totally contrived and the melodrama was over the top at points but I still enjoyed the story and I still got a tear in my eye at a few points.  This won’t be a movie that I’ll go out and buy and watch again and again but I imagine in another ten years, I’ll likely get a hankering for it.

One last note – if you’re only familiar with Reese Witherspoon from her days in romantic comedies, I highly suggest you go back and check out her earlier work.

We keep on getting entries in the Nostalgiathon 2012 series and I highly recommend you check them out!  Recently added include The Goonies from Rogue the Girl, Night of the Creeps from Eric over at theipc and Labyrinth from Natalie Stendall.  So give them some love and then write up your own Nostalgiathon entry!

And coming up next on Cinema Schminema is “I am Nancy”, Heather Langenkamp’s documentary about her days as Nancy in Nightmare on Elm Street and the documentary “Never Sleep Again” about the NoES series.  And then I’ll finally get to my own Nostalgiathon entries (including Labyrinth, Return to Oz and Monster Squad).

Kickawesome banner courtesy of Andy and his wife. 🙂

If you guys will look up above, you’ll see that I created a new page for Nostalgiathon 2012!  I am so tech savvy!  😉  If you click on it, you’ll find all the info on how to participate AND a list of all the current Nostalgiathon posts (which will be updated with each and every incoming one!).  So join us for fun and good times and reminiscence of the golden, olden days!

I HAVE INTERNET!!!!!!  I am back amongst the living!!  Still no power at my house so I have been staying with friends for the past couple of days but they didn’t have internet back till today.  No idea when my house will be back up and running.  We’re hoping it’s by Wednesday like promised since we have another storm coming in Wednesday/Thursday.

Me and mine were far luckier than a lot of people but it’s been a rough week.  Gas is running out in Jersey, there’s food shortages, there’s been some looting…it’s going to take awhile to recover. 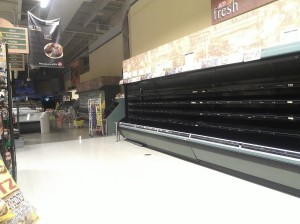 As for me, personally, since I work from home and have been powerless for a week, I haven’t been able to work so that’s the first thing I have to catch up on.  After that, I’ll be working my way back here to blogging so expect me to start popping up in comments again.  I’ll be finishing my run of the Nightmare series and then it’s on to Nostalgiathon 2012!!!!  If you aren’t yet familiar, here’s the 411 (and I am copying this directly from Andy Watches Movies for times’ sake):

In what originated as a flippant remark between Misty of Cinema Schminema and me, Nostalgiathon is finally here.

Allow me to explain!

The purpose of Nostalgiathon is to relive things from your childhood through the eyes of an adult. Since Andy Watches Movies and Cinema Schminema are both movie-focused blogs, we will be covering movies, but books, TV shows, whatever else are all fair game if you’d like to participate.

“How do I participate?” you may be wondering…It’s easy!

And there you have it!!  You can find the original post HERE on Andy’s site and a list of who has participated so far.  I’ll also repost this as a standalone post so it can be linked back too.  But please join in the fun!!

Okay, I’m outtie so I can go do hella work.  Catch you guys soon – and for everyone who emailed to check on me, I greatly appreciate it!!  Thank you!!  🙂