Major props to Mike over at Badasses, Boobs and Body Counts for doing a review of this gem and turning me on to it.  (And if you click that link, it’ll take you to his review!)  I am in love.  There are a lot of things I love in this world: rainbows, kittens, blowing bubbles, unicorns, NYC, books…I love it all really.  But this movie??  This movie was obviously made with me specifically in mind because it had all my favoritest movie things in one giant spectacular extravaganza.

A girl not afraid to tell her boyfriend/non-boyfriend that he’s a pussy?  Check.

I really don’t even know where to start with this.  Do you need a plot summary with a title like that?  I sure as hell didn’t.  But if you are interested, Charlie is the pussy that lives with his foul mouthed Gramps and is in love with Gwen.  They both get mysterious letters inviting them to come spend the night at some house on a hill where if they survive the night they’ll get a million dollars (sound familiar?).  So who exactly invited them there?  Oh, just mad scientist out for revenge, Wolfgang Wagner with his penguin sidekick and his new pet monster.  Then we’ve got Raimi Campbell (hahahhaaaa!!  Love it!), the lispy nerd who is trying to get laid; Iggy, the punk ass fake English douche who apparently can’t fuck for more than a minute and a half and Mona, who likes to show her boobs.

If I post puppet boobs, will I get more hits on my site?

The cinematography was kind of effing fantastic for a puppet movie, the script was deliciously quotable (“Why do you smell like carrots?” …..”I am going to head butt the shit out of you!”) and Raimi was hilarious.  Sure it’s nothing that’s never been done before but it throws together so many elements and nods to cinema history and all in puppet form that it totally rocked my socks.  There’s stop animation (at least I’m pretty sure that’s what I saw) that reminded me of Svankmajer, obvious nods to horror movies of past (Evil Dead and House on Haunted Hill for two), there’s a cartoon portion, there’s patriotic symbolism and did I mention the puppets having sex?  And the penguin?

If I haven’t convinced you by now, I’m sure nothing will but check out the trailer below. 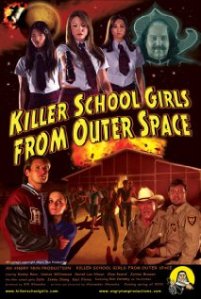 Dude, y’all!  Just dude.  So I followed this guy on Twitter – he had a production company named Angry Nun Productions which made me *giggle* and also reminisce on the days when I was in an improv troupe called “Nuns in Straitjackets” and worked on this sketch show called “L.A.F.F.S.” and then my mind wandered to things like School of the Holy Beast and…yeah, well, suffice it to say the whole angry nun thing really struck a chord.  So we exchanged a couple of DM’s and I mentioned my site and how much I was loving the name of not only the company but also of this film because seriously y’all, just seriously look at that mother effing title!! (I get a little excited whenever I see the word “schoolgirls”…brings up some great movie moments in my mind…)  Anyway, he sent me a screener and I was all prepared to have this done right after Halloween month was over and well, ya know, Sandy and all…soooo, here it finally is – Killer School Girls From Outer Space!!!!! (There are seriously NOT enough exclamation marks in the world for this shiz).

The movie starts out with a quick note about how they truly dig on Roger Corman and how they aspire to be like him and how this movie is made in the same sort of way he did his early works which boils down to this is a superfun throwback to the drive-in days (E, I think you’ll love this!!!).  We’re talking lovers at Lover Lane, racist ole men, spaceships and small town fun, drag races and Ron Jeremy – this has pretty much everything anyone could ever want from a movie.

The opening credits start with an army of men being attacked by schoolgirls and ends with an entirely wicked shot of a planet being blown up complete with old-timey sci-fi music (they talked about that in the directors commentary and I can’t remember the instrument they referenced…) shot with grainy, spotted film that mimics the look of instant classics such as Machete and Hobo with a Shotgun.  Next up is Ben and Allison out at *insert appropriate name for makin’ out spots here* where Allison is giving Ben a BJ, after which they discuss his inner turmoil at wanting to quit the football team (he’s the quarterback of course and Allison is a cheerleader).  Allison (Denise Williamson, who looks a lot like Amy Adams here) sweetly promises him she’ll always be cheering for him when they are distracted by a shooting star and decide to go check it out.  Before they can make it to where the star landed, they of course have to stop at the local drive in diner/hang out (seriously, I could almost swear this was filmed in my hometown, eerie…) where they must catch up with Ben’s best bud (who promptly asks him why he’s hearing that Ben is quitting football – 5 minutes after he’s only ever told Allison and god, that cracked me up because this happens the whole movie and if you’ve never lived in a small town and by that I mean small, then you don’t know the annoyance/humor that goes with everybody knowing your business even before you do) and where Ben is promptly drug into a drag race (more accurately Chicken) with the local bad boys.  The local bad boys are kinda hot, just sayin’.

Drag race/chicken game, then off to finally find the shooting star which ends up being a SPACESHIP!!!  Ben and Allison also run into a burnt up Old Man Jenkins who ends up being killed in front of them and after that they are on the RUN!  First place they go is the police station where they tell their story to the deputy and sheriff (the sheriff being an older fella who doesn’t cotton to dang kids these days with their rock music and their heathen ways) who don’t believe them and then a whole bunch more people die and then suddenly everybody does believe and well, I don’t wanna ruin anything here but let’s just say the ending is so awesomely and ridiculously ridiculous in that epic drive in movie way.

And did I mention THIS guy is in it??

But if you’re like me (and I really think there’s a big majority of my readers who would totally groove on this here thing) and schoolgirls make you giggle like one, people exploding into bits of blood and bloody parts makes your eyes go wide in excitement and you want nothing more than to keep repeating this title in that way that only Samuel L. Jackson can, by repeatedly saying “Mothereffing killer school girls from mothereffing outer space!!”, then this movie is made with you specifically in mind.  And you will love it.

You can find the trailer HERE along with how to order, should you be interested.  Plus there’s other cool stuffs that come with such as a bonus dvd on how to be an indie filmmaker which I personally totally dig on since I’m into that kinda thing.  You’ll also find all the lovely photos that I heisted from (and linked back) with the trailer!  Killer School Girls from Outer Space is a wicked fun time, just like making it with your old lady down at the drive-in!