Wow.  I really did not remember having so much hatred for Freddy’s Dead: The Final Nightmare. But yeah, if I had watched this movie in real time and this was being billed as the last one ever and I watched I would be so pissed off.  It would be like watching Ep. 1, 2, and 3 of Star Wars all over again.  Actually I don’t even know if I watched Ep. 3…

Anyway, Freddy’s back (duh), kids are dying, more of Freddy’s history is revealed and logic, continuity and plain common sense are missing. Read on for further thoughts (they aren’t great – just got power back yesterday and wow, do you know how dirty your house can get after 8 days with no power?  Plus catching up on 8 days of work and stuff equals one sleepy girl.  So I sincerely apologize for what you are about to read.): 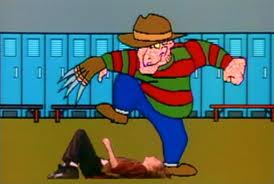 This sums up the movie fairly well.

And of course the trailer:

In summary, eff you Final Nightmare, eff you.