Hey, guys and gals! How goes it in the movie watching world? I don’t do this too often, but I got the heads up about this new movie site called Movli and decided to check it out and well, it’s pretty cool so I thought I’d share. Basically, it’s kind of like IMDB meets Facebook meets Netflix meets Entertainment Weekly meets OK Cupid meets Flipboard meets FUN (the noun, not the band). Neat, huh?

So, you start by making a free account (of course) but the catch is that you have to make an account by signing in either via Facebook, Twitter or Google. I’m not a huge fan of sharing my movie watching habits with everyone I know on social media (Bible Belters not so big on things like “Jesus Christ Vampire Hunter” for some reason 😉 ) but there IS a reason it’s set up that way. (Technically, you can not sign up at all but then all the actions you perform are only saved locally and you run the risk of losing them.) The reason for the social media sign up is, obvis, so you can see what your friends are watching and vice versa. In Movli’s case, however, this is geared towards making your next group movie night easier and more fun by showing you the most compatible films for your group (not for making fun of that poor girl over at Cinema Schminema who had to sit through “The Sinful Dwarf” on a dare…ahem…Isaacs…).

Next up, you get to the down and dirty business of rating every movie you’ve ever seen (and for people like us, that’s A LOT!). Much like Netflix, this is to gather movie recommendations for you. This happens by setting up your personal genome (I had to look that one up – it has to do with genetics – actually the genetic material of an organism. And the word actually works here. I’m a fan. Also hush, I’m a writer and an actress, not a scientist. ;-p ). Anyway, rating movies here doesn’t just bring you movie recommendations but celebrity recommendations as well (actors, directors, writers). And THAT in turn brings you personalized entertainment news. For example, I rated that I was down with “Star Wars” (THE ORIGINALS!!!) and in my entertainment newsfeed were stories about the upcoming Star Wars movies (and how are we all feeling about those anyway? Thoughts? Bueller?). So to sum up – why is rating so much fun here?:

1) If you haven’t seen a movie but you want to, there’s a progress bar you can slide to show how interested in the flick you are, thereby adding it to your Watchlist.

2) Likewise, if you have NO interest in seeing a movie you can blacklist (and oh, have I been having fun doing that – here’s looking at you “Dumb & Dumber 2″…).

3) You also get to rate celebrities – recommended or just from a general line-up. Well, by “rate” I mean you can “Favorite” the ones you like. And when you do THAT, a little bubble appears in the corner of their photo telling you how many upcoming new films they’ll be in. Clicking on THAT bubble brings up a box with the names of the movies and, if applicable, will tell you how much you’re likely to like the film. Totes cool. TOTES.

What else can you do on Movli? There’s a ton more so I’m going to try to keep the rest of this brief so you can go discover the rest of the fun on your own. BUT:

1) You can find other users to follow and make new friends!

2) You have a wall, similar to a Facebook wall, where all your activity shows up (you can totes delete activity from your wall though, so don’t worry Isaacs – when you rate that you loved that Justin Bieber movie, no one will have to know). You can also leave comments there, as can your followers/friends.

3) There’s a database of like 25,000 free streaming movies. Yes, that means a lot of them are classic films, ones in the public domain. But they also have a fair amount of more recent films as well (from the 80s through now).

I dunno, guys, I think it’s pretty kickawesome. I mean, I only JUST started exploring a couple of days ago and already I’ve spent enough time on Movli that the dishes have piled up, I haven’t left the house recently and work was missed… *giggles* My only two issues with the site so far have been the aforementioned having to sign in with a social account and I had issues changing my profile picture (it automatically pulls yours from whichever site you use to sign in with). But in the grand scheme of things, not a bad trade-off. 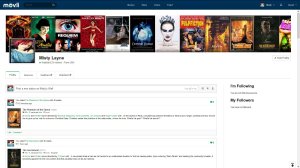 Now, if they’d just add boards like Pinterest so we can organize our movies in whatever crazy ways we’d like to share them with the world (or keep them to ourselves, as the case may be) and maybe add a blogging feature so that we could post our reviews on there, it might very well just be perfect. Or possibly overwhelming…see, this is why people don’t let me be in charge of things. 😉 Regardless, give it a looksie. You might find you like what you see. 🙂 And of course, you can check them out on social media at either Facebook or Twitter!