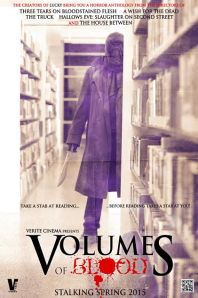 So I got word of this very cool sounding project happening in KY right now and was able to snag one of the main guys (producer, co-writer and co-director), P.j., and convince him to do an interview with me. And by “convince”, I totes mean I tied him up in the basement till he answered my questions.  TOTES. So here it is, all the scoop on the upcoming horror anthology (yay for horror anthologies! I have a soft spot in my heart for them), Volumes of Blood.

P.j.: The Unscripted Film School program is something I co-created with Jim Blanton at the Daviess County Public Library. It’s an opportunity for interested locals to come participate in a hands on filmmaking session with local and regional talent. They have a chance to see what it takes and the various facets associated with making an indie film from special FX to cinematography to acting and directing. We tried it out on a smaller scale in January 2015 and premiered both short films at the Unscripted 3 film series to a lot of praise. Lucky, the Audience Award winning short, has gone on to get some great reviews and screen across the country in film festivals. Because of its success we decided to ramp up the program and do something wholly different and more expansive. 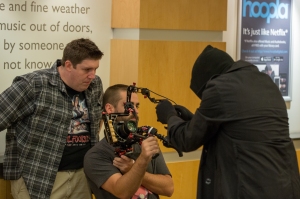 ML: This will be the second film for UFS. The first was a short called Lucky by Todd Martin. But this will be the first full length feature (although an anthology)? How is the process different from making a short to making a feature film?

P.j.: With the first film school program, the basic idea was like the 48 Hour Film Fest, only you’re shooting a short in 7.5 hours instead. Lucky gave us a chance to see the true potential of the program and Jim asked me to come up with some ideas on how to really expand the program. Rather than shoot one or two shorts, we’re now shooting 5 over the course of 4 months and instead of it being a competition, 5 different directors are working on what will be become a single project created from 5 different perspectives. 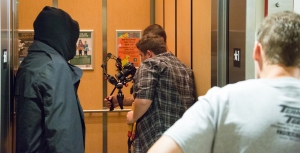 ML: The screenplay for Volumes of Blood is written by yourself, Todd Martin and Nathan Thomas Milliner. How did the idea come about? Was it something you purposely set out to do or was it a lucky accident?

P.j.: I knew I wanted there to be 5 short films. I already had been sitting on some ideas so I wrote the first three scripts, but I knew that I didn’t want to be the only writer for the anthology. I love to collaborate. Todd is a great writer and I contacted him to see if he wanted to come back for another stint with the Unscripted Film School 2. He accepted and the only stipulation I gave him was that one of the two stories he wrote had to be titled “Encyclopedia Satanica” because it’s such a badass title. I didn’t have a story, just a name. Todd got back to me with a couple scripts and I really dug what he wrote. Nathan has been a friend of mine for a while now and I asked him to come onto the project as a director. He chose “Encyclopedia” as his script and then did a pass on it. He added in a lot of cool literary elements and things that took the overall story to another level. Because of that he earned a writers credit as well. 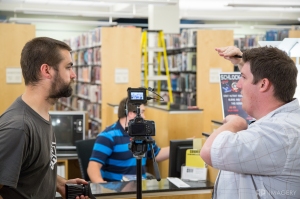 ML: The logline reads “Five tales of dread interwoven when a sociology student gathers several of his friends at the local library to help him create a new urban legend with deadly consequences”, which honestly intrigues me because it reminds me of: 1) the movie Urban Legend; 2) the amazing episode of Buffy -“Conversations with Dead People” and 3) the V/H/S films oh, and 4) one of my all-time favorites Trick’r’Treat. Was Volumes of Blood inspired by any of these (probably not the Buffy episode, eh)? And if not what WAS the inspiration?

P.j.: It’s been pretty incredible the various different films that have come to light since I started this. I’m huge on writing homages to other films because for one I’m a big old school horror fan, and two I think that writing nuances into your stories are these great little moments for fans to grasp hold of a long the ride. I’ve wanted to do an anthology for a few years now and it just seemed like the right time. There are several inspirations and nods in Volumes of Blood that range from Friday the 13th and Insidious to more forgotten horror fare like After Midnight and He Knows You’re Alone. I’ve always been a fan of October and Halloween so several stories revolve around that time of year so I guess you can say that Trick ‘R Treat had some influence as well. 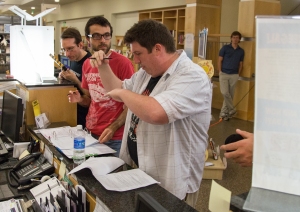 ML: Can you tell us what will be involved with these five tales? For example, will one be a ghost story and another full of zombies? Or is this a less supernatural film?

P.j.: I don’t want to give too much away but being a child of 80’s horror I can tell you that the film runs the horror sub-genre gamut. There will be ghosts, monsters, masked killers and possessed books so there’s a little something for every horror fan out there. 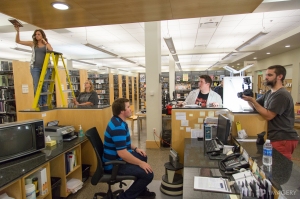 ML: Who is starring in your film? Have you hired only locals or did you expand your search?

P.j.: I expanded my search, but did cast a lot of actors that I had worked with before like Todd Reynolds (Hallows Eve: Slaughter on Second Street) and Louisa Torres (Lucky). This go around I reached out to several actors I’ve either wanted to work with for a while or worked with on others projects like Jason Crowe (The Hospital), Roni Jonah (The Zombie Movie), Jim O’Rear (The Hospital), Kevin Roach (Three Tears on Bloodstained Flesh), Kristine Farley (Bloody Hooker Bang Bang) and a whole slew of others. I’m really excited about the cast. 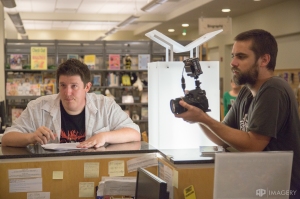 ML: Tell us a bit about the filming process. You’re filming one Saturday a month till it’s finished, correct? Has that streamlined the filming process? Do you think it would have been easier to shoot it over 5 consecutive days? Why draw it out?

P.j.: Because of the way the film school program is structured we need to have time between each film to give the community a chance to sign up to participate on each film. We’re allowing ten each, fifty in all once the project has completed shooting in November. This has streamlined things because it allows us a chance to regroup before the shoots since everyone is working with a different director each time and experiencing a completely different vision from the last. Plus, everyone on board this project is volunteering their time and it just makes sense to shoot it this way to make sure everyone is available to do their job. I myself had a full time job and a family so shooting 5 consecutive days is just not in the cards for me and I wouldn’t expect it to be for anyone else. Drawing out the process also gives me a chance to sit down and start editing the shorts to try and have one finished before the next begins. That way when the final night of production comes the movie will be nearly completed. 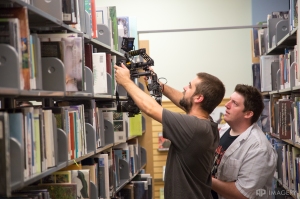 ML: When will Volumes of Blood be released and where will people be able to view and purchase it?

P.j.: I’m huge into gimmicks so the film will have an Owensboro, Kentucky premiere on Friday, March 13, 2015 at the Owensboro Convention Center. It will be hosted by 97X and The Boiler Room, who will also host an exclusive after party. The event itself will be a charity event where all proceeds will be donated to New Beginnings Sexual Assault Services. After that it’ll hopefully be coming to a film festival near you and the DVD release will be before December of next year.

ML: You funded this project via Kickstarter. Was that your first experience with crowd sourcing? Would you recommend it for up and coming directors? What advice would you give them on how to go about using this resource?

P.j.: This was the first time I ever truly begged for money, yes. Outside from family that is. Crowd funding is a weird and stressful thing. If it all works out in the end then the journey was well worth all the sweat and tears, but I can’t imagine spending sixty days struggling to reach our goal and not walking away with something because it wasn’t fulfilled. I mean potato salad got funded for like eighty gazillion dollars and we made our budget because of the support of nearly a hundred individuals and the skin of our teeth no less. It was an amazing feeling when we reached the goal and ultimately the project was 107% funded. I would recommend giving it a try, but prepare to work really hard to get what you want and don’t be afraid to get annoying.

ML: What’s next for UFS and Verite? 🙂

P.j.: Right now we’re reviewing submissions for Unscripted 4 that will start in January 2015 and go every Saturday until the last weekend in February. As far as Verite Cinema is concerned, I honestly can’t see anything beyond Volumes of Blood right now… except Volumes of Blood 2 of course.

A huge thanks to P.j. for sitting down to do this interview (as if he really had a choice, hehe. No, but seriously. I am sorry about the basement thing). If you want to become a fan of Volumes of Blood, like me, give ’em a “like” over on Facebook or follow them on Twitter for all the latest news!