← Anatomy of a Psycho
Blast Vegas → 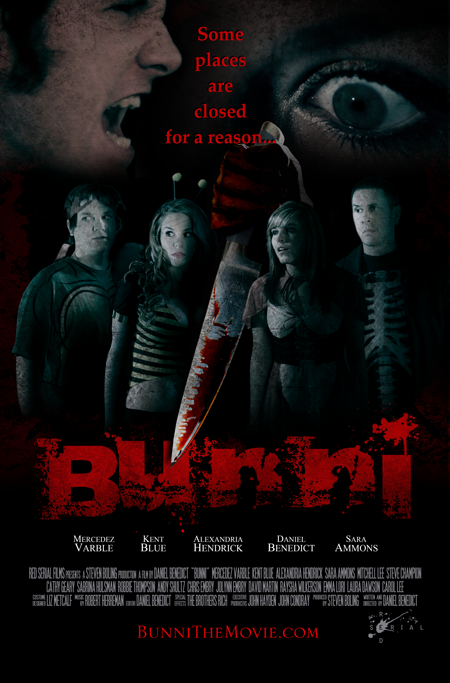 I have to admit to being a fan of this offering from Red Serial Films and Daniel Benedict.  It’s def got an old school slasher feel to it with just the right amount of cheesy goodness to make it pretty damn fun for the whole family.  Okay, well, not the whole family.  Definitely don’t show this one to the kiddos!

Our story starts with an abused woman fighting with her husband and the whole thing just starts with a BAM! (picture that in comic book style writing, k?).  Then we move on to a bunch of college age kids out at a bar for Halloween – we’ve got Dickface (whom I wanted to punch in the balls), his girlfriend, Sweetie and then Honeybee and her boyfriend, Ninja Turtle.  No, of course those aren’t their real names in the film but we know how I like to name characters and make them my own. 😉

Honeybee and Ninja Turtle are pretty norms and a cute little couple.  Dickface is cheating on his girlfriend and majorly abusive towards her verbally.  Again, did I mention the ball punching I wanted to do?  Anywho, they decide to leave the bar and on the way home stumble across this old boarded up former sex shop so of COURSE they just have to break in and see what it’s all about.  Can’t blame them, I would’ve done the same thing.

Dickface drags Sweetie off so she can give him a bj while Honeybee and Ninja Turtle explore the rest of the place.  And that is when the slasher fun begins.  I am happy to report that Dickface is the first to die in an EPIC way that includes…well, you just have to see it.   Brilliant, absolutely brilliant.  (Seriously, I hated this character SOOOO much.  I was SOOOO happy when he died first!)

Obvis, as it’s a slasher movie, a whole bunch of other people die, so I’m not giving anything away there.  There’s also a twist, I actually didn’t see coming, that had me say ‘Wait, what?????’, so that was fun.  For such a lo-budget film, the special effects and gore are totally top notch.   This is one of the goriest films I’ve watched in awhile (although I haven’t been watching a ton of movies, I know but still).  And it seemed to be all old school effects so major ups for that shiz.

The acting varied.  The majority of people were pretty good but there were definitely a couple of moments where I wondered if this was some of these guys first film.  Nothing so atrocious that it totally took away from the overall effect, just a mild moment here and there where I went, “Huh.”  And if it was their first film, then good for them because they picked an excellent one to be a part of.

So what can I say?  I dug it, cheesy parts, gory parts, even the couple of parts that made me say “Hey, what?” because this right here is what true indie film is all about especially when it comes to horror.  You go Daniel Benedict (writer/director/Dickface) and Red Serial.  You guys are rocking it!

← Anatomy of a Psycho
Blast Vegas →