Anatomy of a Psycho 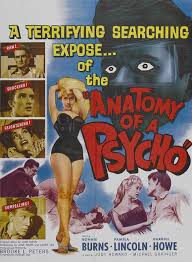 So I found this cool app on my Kindle where you could download like 99 classic horror films for $.99.  Of course I wasn’t going to pass that up especially since I am severely lacking in the classic horror department of my education – it’s pretty limited to things like Cabinet of Dr. Caligari and Haxan.  I decided to watch them in the order they appear in the app and this was right after Bucket of Blood (which I’ve already seen and own) so Anatomy Of A Psycho 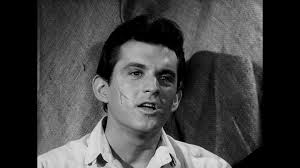 Meet Chet.  Chet here is apparently a teenager…ahem…whose brother has just been executed because he was accused of killing someone.  Chet thinks his brother was innocent and is extremely upset about his bro’s execution while everybody else, including Chet’s sister believes the other brother was guilty and got what he deserved.  Anyways, Chet gets increasingly delusional and paranoid (or something…really he just starts ranting a lot and getting into fights) until he finally attacks the son of the only witness to his brother’s crime – a boy who happens to be dating his sister.  Dum dum DUM!!!!  Oh and someone dies.  Just fyi.

I don’t watch a lot of classic movies (remember how I was going to try to watch all sorts of classic movies in 2013 and it never happened??) so I dunno how I feel about this movie.  Mostly I was confused that everyone was talking about going to school, a school with lockers, when they all looked to be in their 20s – did they not actually use teenagers in movies back in the 60s?  Then I was annoyed by the sister because dear lord, all she did was swoon onto couches in hysterics.  Seriously, woman, pull yourself together!  Oy.  And thirdly, I was confused about why this was a horror movie.  I’d classify it more as a psychological thriller – a bit of a boring one but still.  I also saw elsewhere that it was classified as exploitation…not sure how that one works either.  Melodrama, definitely.  Horror – not even.

But overall, it was okay.  Yes, it was melodramatic at times and silly but it wasn’t the worst thing I’ve ever seen.  It was fun to watch something I’m not used to, at any rate and I’m excited to check out the other 97 or so films.