is…interesting. And has absolutely nothing to do with photography like I thought it did.  Instead, it’s a kind of mixed up tale of a girl who got into a car accident, killing her three friends, who then gets sent to rehab instead of jail and then ends up as a playtoy for three psycho siblings hellbent on purging her of her sins.  So yeah…interesting…but I’m not sure how much I liked it.

What I definitely didn’t like was the first thirty minutes or so where the scenes keep switching in a non-linear way from Michelle (the aforementioned girl) being in rehab, hanging with her friends at a club, going on a modeling job and then being in psycho land.  Back and forth and back and forth and back again, the scenes switch with me being convinced that she actually died in this car wreck and is in purgatory (she didn’t so no spoilers there) but I was terrifically confused this whole time as to where we stood on the time frame of things. 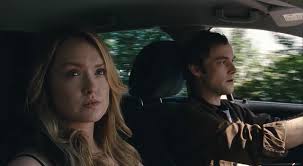 Essentially, the mother/warden from the rehab clinic or whatever it was, is actually one of the psychos and has two brothers.  They grew up with a crazy religious mother who said things like “Confess your sins!” and “You’re a dirty little girl!” so that really fucked them up for life.  Not sure how they all landed jobs at this rehab place but whatevs.

And to carry on their mother’s legacy, when girls are let out of the rehab, they tell them they’re getting a job helping out on a modeling gig (helping out with lighting and hair/makeup/etc.) but when the girls arrive, they’re told a model has dropped out and they will need to take her place.  And that’s when the real fun begins as the trio of siblings slices and dices and makes mincemeat of the girls all while haranguing them about their sins and being “dirty little girls”.

The acting is far from terrible in this but is just typical of your standard slasher film.  There’s a couple of good fight scenes that happen near the end that I really dug.  There’s your typical cat and mouse going on – will Michelle escape or won’t she?  Overall, pretty standard fare.

Not great and not terrible, this is good rainy day material.

Posted on 2013.26.December, in American Cinema, Horror and tagged cat and mouse movies, darkroom, has nothing to do with photography, no idea why it's called dark room, not bad, religion can really mess a person up apparently, slasher films, will michelle escape. Bookmark the permalink. 20 Comments.