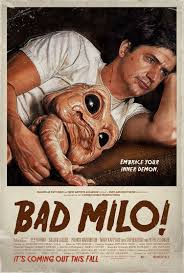 I was sent this screener recently and wasn’t sure I was going to find anything to like about it.  It just didn’t seem to be my type of humor.  Oddly enough, however, I ended up really digging this story about a guy who shits out a demon on the reg.  Quite strange really.  Maybe I was just having an off day. 😉

Out of ideas and at the end of his rope, Duncan seeks the help of a hypnotherapist (Peter Stormare), who helps him discover the root of his unusual stomach pain: a pintsized demon living in his intestine that, triggered by excessive anxiety, forces its way out and slaughters the people who have angered him. Out of fear that his intestinal gremlin may target its wrath on the wrong person, Duncan attempts to befriend it, naming it Milo and indulging it to keep its seemingly insatiable appetite at bay. 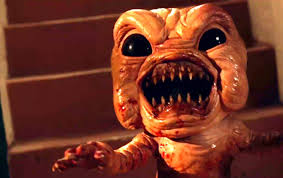 You wouldn’t expect to find a lot of sweet in a movie like Bad Milo but it actually was rather touching.  Touching in the way Dead Alive is touching sure (oh c’mon, it totally is!!) but touching nonetheless.  The relationship between Duncan and Milo, while being a relationship of manipulation is also a cute friendship/father and son relationship, a relationship which actually ends up bringing Duncan closer to his own estranged father.  There’s hope here, folks.

And I do love when people’s feelings and emotions become physical manifestations because who HASN’T felt like they were so stressed out that their stress was just going to become this thing, this entity and go around wreaking havoc?  We have so all totally been there.  TOTES.  So Bad Milo wins points for that.

It even wins points for the gross out factor.  Gross out is something where I can go either direction, just depends on how it’s presented.  Jackass?  Hate it.  This movie, totes down with it.  Probably helps that the majority of the gross out factor is either alluded to or is of a bloody nature rather than a shitty one.  It really is the finite details that can make all the difference, peeps.

Bad Milo definitely isn’t for everyone.  Hell, I can think of about 10 people right off the bat that it isn’t for.  But if you take a chance and look past the fact that this is a movie about a dude who has a demon that comes out of his ass, you might just be pleasantly surprised, as I was.

And if you wanna find out more about Bad Milo or find out how you can watch, check out Magnolia Pictures site!