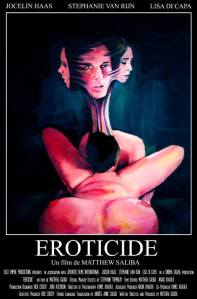 This is a film about sex, desire, control, fetishes – all stuff I love to watch and discuss (seriously my Netflix queue is kind of embarrassing, lol) and the subject matter is handled quite well.  Too often films of this nature turn either cheesy or just downright pornographic but Eroticide avoids those tropes with the intriguing use of seen fantasies and excellent cinematography.  Our story starts with Yan and Elise discussing their 9 month anniversary and meeting (when Yan hit Elise with his car) over dinner when Kendra, Yan’s dominating ex, suddenly appears.  In she walks and instantly Yan is fawning over her while Elise looks on in disgust.  Kendra begins questioning their relationship, asking about their sex life only to discover that Elise and Yan haven’t yet had sex.  This is remedied later that night but the only way Yan is able to perform is to imagine humiliating scenarios featuring Kendra (and sometimes Elise).  We see his fantasies played out, intercut with scenes of him and Elise making love and the result is lovely to behold.  From there the film moves into Yan’s betrayal of Elise and Elise’s ultimate sacrifice for the man she loves with Kendra in the background, the whole time keening with delight.

Eroticide is one of those little independent short films that packs a punch, hitting you hard right where all your dirty little secrets hide.  It takes a look at the darker side of love and lust and manages to accomplish an in-depth look in just under 40 minutes.  Honestly, I’d love to see this script fleshed out into a feature.  While I dug the movie, it did feel a little short and a little incomplete, mostly with the feeling that the viewer doesn’t get to know Elise as well as Yan and Kendra.

And speaking of Elise, she’s my favorite one here, not so much for her character because really none of these characters are what you’d deem likable as they’re much too self-involved with their own flaws (although Elise does step out of that and looks beyond herself) but because of the actress playing her, Stephanie van Rijn. Stephanie is fragile, emotive and delicate without being completely downtrodden (plus she’s a redhead and we redheads stick together! ;)).  Lisa Di Capa as Kendra was only okay – while she had the look for Kendra down and was fabulous at playing the icy bitch, she seemed to be holding back and her monologue at the end felt stilted.

Ooohhh, just realized another nice touch – having Elise as a redhead because she’s the fire on one side while Kendra is the ice on the other.  Nice!

Jocelin Haas as Yan does a fine job but doesn’t overwhelm.  He’s emasculated, weak and full of self-loathing but the performance didn’t make me want to stand up and cheer.  He is naked for about half the film though so there’s a plus. 😉  Again, I’d love to see this fleshed out into a feature – I don’t think the characters have time to fully develop but there’s amazing potential there.

Altogether, I have to recommend Eroticide, especially if you’re a fan of movies such as 9 1/2 Weeks or Boxing Helena.  This film is a wonderfully done, though slightly underdeveloped look at the psychological war fare of love and relationships and the very real physical wounds they inflict.

Wanna learn more?  Check out the Facebook fan page for all the 411!