← Starting From Scratch
The Smalls Family → 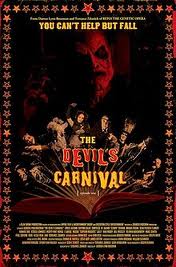 If you hated Repo! The Genetic Opera

, then you will hate The Devil’s Carnival

.  Why?  Because they were both created by Darren Lynn Bousman.  I, however, LOVED Repo and also LOVED The Devil’s Carnival – in fact, I might’ve loved this one just a tad bit more (just don’t tell Anthony Head because he is wicked hot even if he is way older than me).  Part of it was the music here – I can’t think of a single song I disliked in this film and have had one on frequent play since I watched the first time (yes, I’ve seen it twice now!).  This one actually:

The premise is three people die and they all wind up in Hell.  From there we get three of Aesop’s Fables (another reason I loved this – fairy tales and mythology may be my big two things but I’m also a fan of Aesop!): The Scorpion and the Frog, Grief and His Due and The Dog and Its Reflection.  Add to that the carnival setting, the quirky and sometimes frightening characters plus the stage and theatre setting and this girl was in love at first glance.

What’s NOT to love about this guy and his plastic hair??

And here’s the whole carnival crew!

There’s a lot of the same actors in this that were also in Repo – Alex Vega, Paul Sorvino, Bill Moseley, Nivek Ogre.  I didn’t even notice Vega was here until I saw her name in the credits, then I had to google to find out which character she was.  This also only clocks in at 55 minutes so it’s kind of something light and airy to have on while you’re doing other stuff…and by light and airy, I mean kind of morbid and grotesque…eh, we all have our own definitions for stuff.  😉  No nudity or sex to be found here (well, there’s a naked woman who is whipped during one of the songs but they don’t really show anything other than her back), just good clean devilish fun, so enjoy!

← Starting From Scratch
The Smalls Family →