Omg, I finally had time to watch a movie!!!  I know, I know, I am way behind the bandwagon on V/H/S

.  You all reviewed it like 8 years ago but I’m really excited I finally got to see it!  Also, and I might have asked this before, but a lot of you guys review the same movies at the same times and not just new ones either – is there a secret club???  Can I join??  I wanna be all cool and in another secret club!  😉

Anyway, my initial thoughts on this were I really dug it but I definitely didn’t dig it all.  I’ll try to keep this mostly spoiler free on the off chance someone else actually hasn’t seen it.  We all know it’s an anthology so it’s 4 or 5 different segments.  Basic premise is a bunch of douchey guys who go around grabbing girls’ boobs and filming it for some sleazy pornorific site decide to do the ultimate bad and break into a house to steal a VHS tape (not sure why THAT is the ultimate bad but the ringleader seems convinced it’ll be the biggest and best thing they’ll ever do…weirdo….).  So off they go and off they break in and lo and behold, there’s a dead dude just hanging out in a chair with a bunch of tv’s playing static.   Kinda creepy, no?  Now, not one of these douchebags has a freaking clue what tape they’re looking for (most poorly planned heist EVER) so they just start going around and watching any tape they can get there hands on.  Ergo, vignettes.

First  up, we have this chica who really just wants to be loved and is seriously misunderstood.  This was probably my favorite of the bunch.  Scumbags getting there comeuppance?  Totes there! 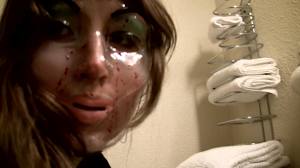 Then we’ve got this gal along with what must be the most boring couple of all time.  Seriously was bored through out this one.  The twist was not twisty enough and there wasn’t enough build up to the twist and it was just blah.

Kay, I might be getting these next few a little out of order. This one was middling.  Loved the use of video chatting for the whole thing but they didn’t tell enough of the story for me to really care.  Dude’s a creep but I’m not entirely sure if this was an alien thing or if he’s just really into the black market. 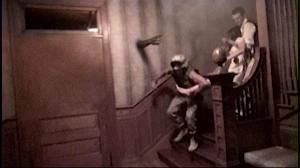 One learns from V/H/S to never try to save a pretty girl.

Now this one was awesome.  Short, sweet, simple and straight to the point.  You never know what you’re messing around with kiddies so be very very careful.  Just because a bunch of dudes are trying to cut a girl up in some sort of crazy ritual, doesn’t mean they don’t have a good reason. 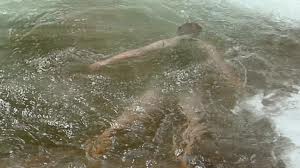 Now this one I didn’t love but I did really dig the camera work they had going on.  This one involves a girl who likes to tell people they’re going to die and some sort of entity that can only be seen via video and the entity and the way they shot it totally creeped me out.  Major props for that.

If you haven’t seen it already, definitely give it a go.  There’s lots of creepy and a little bit of gore and you’ll be rooting for a whole bunch of people to die!

Posted on 2013.5.February, in American Indie, Horror, Lo-Budget and tagged jumping on the bandwagon, movie anthologies, not half bad, this is not trick'r'treat, v/h/s/. Bookmark the permalink. 38 Comments.