← I am Nancy
A Project for the Upcoming Year → 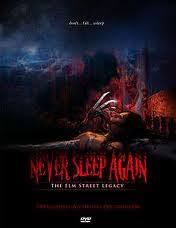 concludes the Nightmare on Elm Street series (that should’ve been done by Halloween, damn you Frankenstorm!! *shakes fist at the skies*).  I’ve pondered long and hard over just how to review this one as 1) it’s a documentary and 2) it clocks in at four hours.  Obviously, bullet points wasn’t going to cut it for four hours (my gosh, can you imagine??) and with so much information it’s hard to know what to say about it.  So…

That said, I love this documentary, it’s one of my favorite ones ever (and I watch A LOT of documentaries).  And that said, unless you really dig Nightmare on Elm Street or are just highly interested in the movie making process of one of the greatest horror franchises of all times, you probably won’t enjoy this.  What Never Sleep Again does is start with the original Nightmare and continues on with behind the scenes and cast and crew interviews all the way up through the rest of the series.  It’s also the story of how New Line rose to fame. 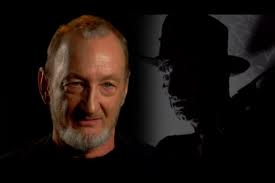 The nicest man on the planet, Robert Englund.

It’s fascinating and it covers everything from how they did that totally sweet kill scene of Tina in the original Nightmare (they built a rotating room, just fyi, which I find so f’ing cool – I love old school effects!) to the homosexual undertones in Nightmare 2.  The film also presents photographs, storyboards, conceptual art, publicity materials, archival documents, and behind-the-scenes footage that have never been previously shared. Never Sleep Again expands on Wes Craven’s motivations in creating the first Elm Street film. It also explores behind-the-scenes of the original film and all of its sequels. Through interviews, the film shares how cast and crew brought their own worst nightmares to life on screen and examines the impact the series and its mythos have had on pop culture and the horror genre in general. The documentary also explores the rise and fall of Robert Shaye’s New Line Cinema and its reputation as “The House That Freddy Built”.(wikipedia.org).

And really that’s all I can say.  This film is a plethora of information and if it’s an insider’s look you want to have this film is the film for you.

← I am Nancy
A Project for the Upcoming Year →