← Nightmare on Elm Street 4: The Dream Master
FrightFest and Frankenstorm → 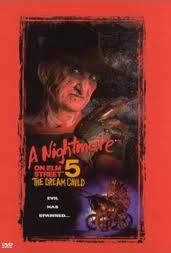 is where the Freddy franchise starts to get a little silly.  Well…that’s not entirely accurate.  It was gradually getting there anyway but this one is all special effects work, less awesome deaths and a point where one says to oneself, “Self – why are we still watching this?  Self – why is that girl not leaving the shower when brown water starts gurgling up from the drain? Self – tell me again when that particular point in Freddy’s legacy came into being, please.”  Dream Child doesn’t suck it big time or anything but it’s another twist in the fun of Freddy. 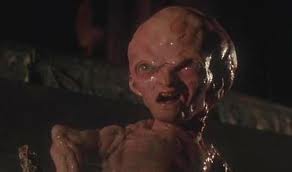 So Alice is back with Dan and all is well.  Well, not really cause the movie starts with her almost drowning in the shower.  Don’t laugh.  That’s totally something that would happen to me too!  Anyway, it’s all a dream of course and what can it mean but that Freddy’s back!! Muahahhahaa!!  Next day is high school graduation and we meet Alice and Dan’s new friends (since the other ones all died).  We’ve got Pretty Girl, Swimmer Girl and Comic Book Guy.  Pretty Girl has a bitchy stagemom, Swimmer Girl is our skeptic and Comic Book Guy is not fond of blood and violence unless it’s in his comics. 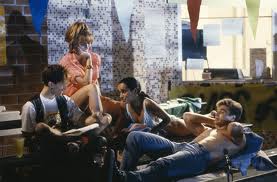 Alice keeps having bad dreams and keeps trying to convince Dan that Freddy’s back but Dan just brushes it off as lingering post traumatic stress.  Duh, Alice.  You control Freddy.  Try to remember that, silly goose.  Dan is, of course, the first to go.  He tries really hard to fight back but Freddy has him die in a fiery car crash (coincidentally this is how my father seems to be convinced I will die.  Not because I’m a bad driver.  I really don’t know why…).  Poor Alice.  She sees the cars go boom and passes out.  She wakes up at the hospital with Swimmer Girl, her recovered alcoholic father and a doctor who informs her that she’s pregnant.  Oh, snap!

Long story short (because seriously re-watching this today it felt like it was 8 million years long but I’m also really tired so maybe that’s why): 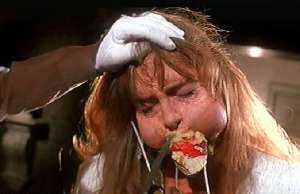 And it’s all because Freddy is able to enter the waking world and the sleeping world through Alice’s unborn child’s dreams.  Don’t ask – I have no explanation for that waking world thing I just know Alice kept yelling at people about it.  Oh and Alice and her unborn child hang out a lot in this movie except her unborn child is around 8 when she meets him.  He’s definitely the key to this whole hootenanny.  And Freddy’s mom is back and comes in for a little last 15 minutes help the heroine activity.

Underlying themes in this one?  Eating disorders, women’s rights over their bodies, abortion, lack of parental parenting and possibly comic book violence.  This one is much more middling than the last – it seems they spent the majority of their budget on special effects and while some are cool, considering the year this was made, some are just really really bad.  There’s some cool scenes but the deaths are way less fun and they’re way quicker also. 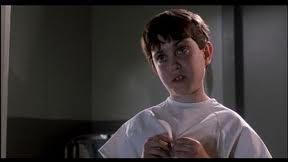 Hi mommy! What? I haven’t even been born yet? Well, this is awkward…

Freddy with no Freddy makeup!  Freddy as man!!

I wonder how much inspiration American Horror Story Asylum drew from Freddy’s backstory?

← Nightmare on Elm Street 4: The Dream Master
FrightFest and Frankenstorm →