← Things That Go Bump in the Night
Evil Dead: The Musical → 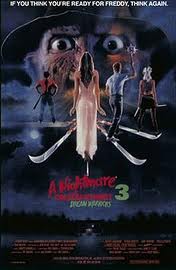 is easily my 2nd favorite of the Nightmare series (and quite honestly comes very close to beating out the original even).  Why is that?

1.  Nancy is back, beyotches!!!  Nancy and Freddy are like freaking Romeo & Juliet, star crossed lovers…or something…and not only is she back but she’s older and wiser.

2.  The entire cast is amazing.  Patricia Arquette in her first role.  Laurence Fishburne as an orderly.  Zsa Zsa Gabor!  Seriously, there is no bad in any way here acting wise.

3.  In ways it’s scarier.  It’s bad enough to know that if you fall asleep you die but add to that the social stigma of being labeled “crazy”, being in a place that will consistently sedate you so you have to sleep and the ever present threat of the padded room…it heightens everything you can fear.  I mean, hell, American Horror Story is doing an asylum story this go around – there’s  a reason people fear them.

4.  Freddy’s kills here are some of the most epic of the series.  Just take a look: 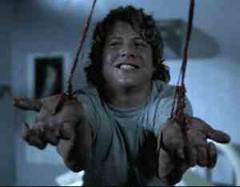 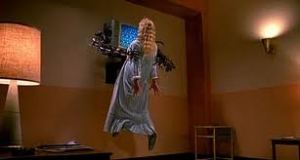 5.  Apparently Freddy can’t do any of that voodoo bodily possession of the 2nd movie but instead we have another twist – Kristen has an ability to pull people into her dreams.  This change I didn’t mind as much because it still dealt with the concept of dreaming and though rare people do sometimes “share” dreams.

6.  Nancy tells the kids that in their dreams they can be anybody and do anything they want.  Does it save them all?  Hell, no.  But it results in some hilarious dream sequences that are super fun. 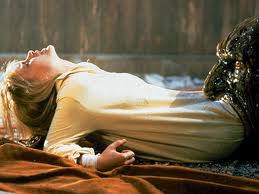 This moment has ALWAYS freaked me out on so many levels.

8.  In interviews with cast and crew in the DVD extras, it is revealed that the original idea for the film centered around the phenomenon of children traveling to a specific location to commit suicide, with dreams of Freddy Krueger eventually discovered to be a common link between the youths. Suicide, at the time, was a taboo social issue and this led to the abandonment of that storyline, though some aspects remained within the filmed version which still depicts suicide and self-mutilation, though they were deemed less controversial because these acts are committed with Freddy’s distinct influence, inserting enough fantasy into the acts to remove it from the supposed controversial exploitation of disturbed youths in America. ~Wikipedia

This is another reason I like this film.  Even though they took a lot out, they addressed issues that are not only important but are near and dear to my heart.  Sometimes exploring issues like suicide, self-mutilation, bullying, etc. in a fantasy setting can be the only way some people can get help or help themselves.  There’s a reason people love horror so much – we can confront our fears without actually confronting them and can go through a reasoning process that can help create better coping mechanisms (just my thoughts anyway).

9.  This came about because of the movie:

10.  And finally we learn a lot more about Freddy’s past and wow is it intense and disturbing.

← Things That Go Bump in the Night
Evil Dead: The Musical →