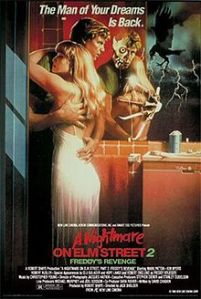 , my least favorite movie in this series.  Why is it my least favorite?  Well, 1) it’s pretty god awful and 2) they take everything that was wonderful about the original and toss it out the window.  If it’s ain’t broke, don’t fix it but instead we get a new take on Freddy, a reinvention and it does not play out well at all.

Five years have passed since the events of the original movie.  Jesse and his family have moved into Nancy’s old house and of course strange things start to happen.  Jesse is prone to nightmares but not the kind in the original.  There’s a lot going on in the movie involving boiling temps in the house at all times with things catching on fire or melting.  But the biggest problem here is that Freddy isn’t killing people in their dreams.  No, this time around he’s decided to go for full blown bodily possession in the form of Jesse.  Like literally.  There’s a scene where Jesse rips off his skin and Freddy is standing in his place. 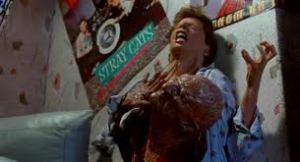 It’s, like, totes cool if I just borrow your body for a bit, yeah?

At first Jesse doesn’t know what’s happening but then there are times where people die or almost die and he comes to and realizes that he’s killing people for/as Freddy.  So basically, we’ve got some heavy dissociative identity disorder going on here. Which ISN’T what Freddy is about!  Grrr….Freddy kills you in your dreams, that’s why he’s terrifying.  If he’s just running around possessing people, it’s not scary, that’s like your everyday stuff.  I get that at this point they’re still creating the lore of Freddy but seriously.  Just seriously.

Anyone else think she kinda looks like Meryl Streep?

So yeah, people die and there’s some stupid stuff like a crazy bird attack (because Freddy possessed the bird?) and mostly what people know this movie for is it’s strong homo-erotic undertones.  While they were making the movie, they didn’t realize those were there but in hindsight they laugh and laugh about it (it gets delved into in the documentary).  Some highlights include Jesse’s dance scene in his room with pelvic thrustiness, the coach at his school dressed up in leather BDSM attire (why?  No reason) and Jesse running away after he kisses the girl to his best friend’s house for comfort and reassurance.  In fact, some people look at this movie as a metaphor for coming out and being comfortable in your own skin (Jesse isn’t comfortable with his latent homosexual tendencies and as such starts acting out, i.e. Freddy coming out of his skin).  It’s an interesting take on an otherwise forgettable movie.

Do yourself a favor and check out the epic dance scene below!