← So Yeah, I Missed Acting
The First Five – How to Kill a Judge →

First, thanks to all for your support during the show’s run!  It is so greatly appreciated!!

Secondly, in an effort to get a sampling of all the “amateur” critics out there, Thomas over at Ontopic Reviews has decided to do what Sight and Sound has done and get voters to decide what the greatest films ever made are.

Be sure to go over and check him out because 1) he’s pretty cool and 2) this project is going to be wicked!  🙂

Thirdly,  Andy from Andy Watches Movies and I are hosting a blogathon in the next month or so (details to follow!).  The theme?  Nostalgia!  We all have movies from growing up that we love; The Goonies, Star Wars, Ghostbusters, Ferris Bueller, Karate Kid, etc. These movies are movies that many of us grew up watching and likely still have great memories of the movies as kids as well as adults. We want to focus on that nostalgic factor to films, but also films from your childhood that may not have been super popular or that you had a weird attachment to as a kid.  It’s going to be super exciting and super awesome so I hope you all will play along with us!  🙂  Oh and if you’re not already an Andy fan, head over and check him out!  Seriously, what are you waiting for?

Omg, what the eff happened in this movie??  I have no freaking clue because I could not stop *giggling* over Midnight Movie: The Killer Cut

!  (Except I didn’t watch the Killer Cut but that’s the only link I found).

This movie is so awesome.  Like, so totally awesome.  I don’t even understand what was happening here (and I don’t think it was because I was watching while I worked either!).

K, so the movie starts with these hilarious doctors.  Doctor #1 decides that it’s a great idea to show Mr. Radford (currently of the psych ward) a movie that Mr. Radford had previously directed and starred in – a horror movie along the vein of Texas Chainsaw Massacre.  Doctor #2 thinks this is a really crappy idea and Doctor #1 is all like, “Oh but I got his hopes up about watching it, if I take it away now, I’ll feel really guilty.”  What the what???  *giggles*  Nothing about that makes any sense.  Anyway, Radford watches the movie, then starts eating his own arm (I don’t understand either) and then the next day one of the docs shows up and the whole ward is a bloody mess with no bodies.  Got all that?  K, moving on. 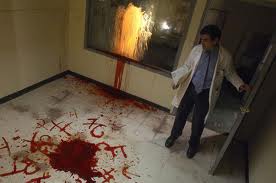 Whoopsie. Maybe showing him that old movie of his wasn’t the best idea I ever had. Oh well.

Next up is a group of good looking kiddos in a dilapidated old movie house, all pretty solid stereotypes.  Some work there, some are just there to watch an old slasher film, that coincidentally is MR. RADFORD’S FILM!!!  Bet ya didn’t see that one coming!  Ha!  Okay, so get this – the killer in the movie comes off the screen and starts killing everyone!!!  I’m so not kidding!! 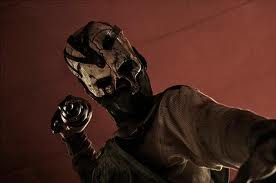 Don’t question how I came off that movie screen or you’ll be screwed.

I don’t know why he comes off the movie screen or how or really what any of this had to do with Mr. Radford, except for him making the movie.  I don’t know why there was some vague back story about a couple of the kids having been abused by their father or why the big burly biker guy is a complete dick for the majority of the movie then turns into a big softie and wow, did that guy have huge freaking hands.  All I know is that I want to watch this movie again.  Like right now.  And I want them to make a sequel or a remake so I can be in it.  Like right now.

← So Yeah, I Missed Acting
The First Five – How to Kill a Judge →