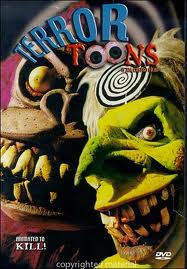 If you’re a regular reader of this blog, you’ve likely heard me mention Terror Toons

at least once, as I consider it quite possibly the worst movie ever made (and that’s saying something!).  So I decided it was time to share the atrocity…um, I mean love with you all!

, I certainly wasn’t expecting greatness but this went from bad to some form of horror that I’ve never before or after encountered.  The premise of the movie is a little girl (of course played by a busty mid-20 year old) who receives a videotape called “Terror Toons”, a cartoon that features a mad doctor and his sidekick, homicidal gorilla (see? Sidekick homicidal gorilla should = hilarity but NO).  While she’s watching the cartoon, the two characters come to life, jump out of the t.v. and embark on a killing spree that’s part disgusting and part ridiculous. 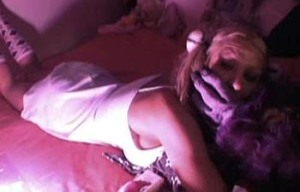 See how my hair’s in pigtails with fun little holders? Clearly, I am a child!

Meanwhile, the girl’s older sister and friends are in the living room playing what is, as far as I can tell, the only documented game of strip Ouija EVER.  How does that even work??  You take off an article of clothing when the friendly spirits tell you to?  They fail to notice the little sister’s death…their friend’s death…the pizza delivery guy’s death…you see how this is going right?  It’s not until the mad scientist and evil gorilla actually pop out into the living room and start singing and dancing (yes.  Singing and dancing.  It goes to there…) that they notice something strange is going on. 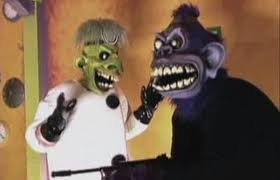 And then?  And then the whole house turns into one big cartoon acid trip with swirling colors and…well, honestly, that’s when I had to turn the movie off.  It’s not often a film beats me but dear god, this was so horrible I admitted defeat.  I can only recommend this for heavy drug users or hardcore revenge.