← Hobo with a Shotgun
Kind Hearts and Coronets → 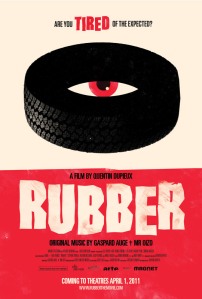 A tire comes to life and uses it’s psychic powers to kill people by blowing their heads up.  It sounds like a pretty simplistic film, right?  Maybe even a short film you’d find on Youtube that was created by a bunch of adolescent boys aspiring to be the next Spielberg.  Oh, and speaking of Spielberg–why was E.T. brown?………..No reason.  And therein lies the beauty of Rubber

The movie opens with a Man standing in the desert behind an obstacle course of chairs.  Out of the distance comes a cop car that proceeds to smash all the chairs before stopping in front of the Man.  From the trunk emerges the Sheriff who casually takes a glass of water from the other cop driving the car and comes up to tell the audience about the film we’re about to witness.  Only he’s not talking to us, he’s talking to the random group of people who appear behind the Man.  They’re in the desert to watch a movie, a movie that according to the Sheriff has no reason.  Because life is full of no reason.  And from there the audience (us and them) watches as a tire comes to life and realizes it’s potential for killing, strangers meet and intersect in patternless ways and the Man follows the orders of an invisible Master.  Why?  No reason.

On the surface, “Rubber” is a B-movie but one that’s beautifully shot with gorgeous scenery and sunsets.  It’s also an absurdist comedy in the vein of “Wilhelm Reich in Hell”.  But maybe, just maybe there’s more to it than that.  Now this is merely speculation on my part but underneath the exploding heads and one-off jokes, “Rubber” is a film about senselessness.  Senseless violence has become a way of life and is unfortunately all to easily ignored.  Senseless poverty goes unseen and unheeded every day.  Hunger and homelessness are worldwide problems with no end in sight.  Scenes of the Audience correlate to the action in the “movie” they’re watching  in their decension upon each other after more than a few days in the desert with no food.  What starts as simple annoyance and sniping with each other turns our Audience into a ravenous horde whose downfall is their inability to simply get along and work together.

Several scenes in this film involve the act of ignoring, from latent child abuse to environmental destruction.  Then there’s the acts of impatience and the quest for fame.  We want what we want and we want it now and there’s many in the world that want their fifteen minutes.

So maybe “Rubber” is a social commentary about the state of mankind.  Or maybe it’s just a story about a tire that likes to blow up heads.  Either way, it’s an interesting film and I’d say your time is much better spent watching this than the new Legos movie that’s supposedly coming out……

← Hobo with a Shotgun
Kind Hearts and Coronets →